Advice, support and information about the cost of living crisis

Marvin Rees is the elected Mayor of Bristol. 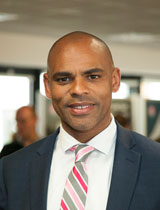 Marvin Rees was first elected mayor in May 2016. On that day, Bristol became the first major European city to have elected a mayor of black African heritage. He describes becoming mayor as another expression of a deeper commitment to building a fairer, more inclusive world.

He began his working life with Tearfund, one of the UK's leading international development agency. He went on to spend time working in the US with Sojourners, a Washington D.C. based social justice organisation, and President Clinton's advisor Rev Dr Tony Campolo. On returning to the UK he worked with BBC Bristol as a Broadcast Journalist, with the Black Development Agency supporting the BME-led voluntary sector and NHS Bristol's Public Health team on Delivering Race Equality in Mental Health.

During the same period, he completed his first Master's in Political Theory and Government, and a second in Global Economic Development. He also had a number of public appointments including the National Community Forum, became a Yale World Fellow and co-founded the City Leadership Programme.

Marvin was born and brought up in Bristol by his mother, moving between St Pauls, Lawrence Weston and Easton. He entered the political world having graduated from Operation Black Vote and Labour Future Candidate programmes. It was there he found open doors where previously there appeared to be none. He was also challenged that the most vulnerable needed people to move beyond merely pointing the failures of world's political leadership, and take the risk of stepping up to try do something to fix it

Marvin has declared Bristol a City of Hope, built on ambition, inclusion and social justice.

During his first term in office, he oversaw the building of almost 9,000 homes, announced the development of a mass transit system and provided quality work experiences for over 3,500 children who wouldn't readily have access. Bringing fairness to the city council, he has achieved accredited Living Wage Employer status, and introduced Ban the Box.  He led the successful bid to bring Channel 4 to Bristol and is leading the city's response to both the climate and ecological emergencies. Building a compassionate city, he has kept all children's centres and libraries open and led city-wide campaigns on period poverty and child hunger. Working with partners, he coordinated Bristol's response to the coronavirus pandemic and planned the city's recovery.

After serving an extended five-year first term due to the coronavirus pandemic, Marvin was re-elected as Mayor in May 2021.

He lives in Bristol with his wife and three children.

Tell us about a problem with a form, page or Citizen Portal account